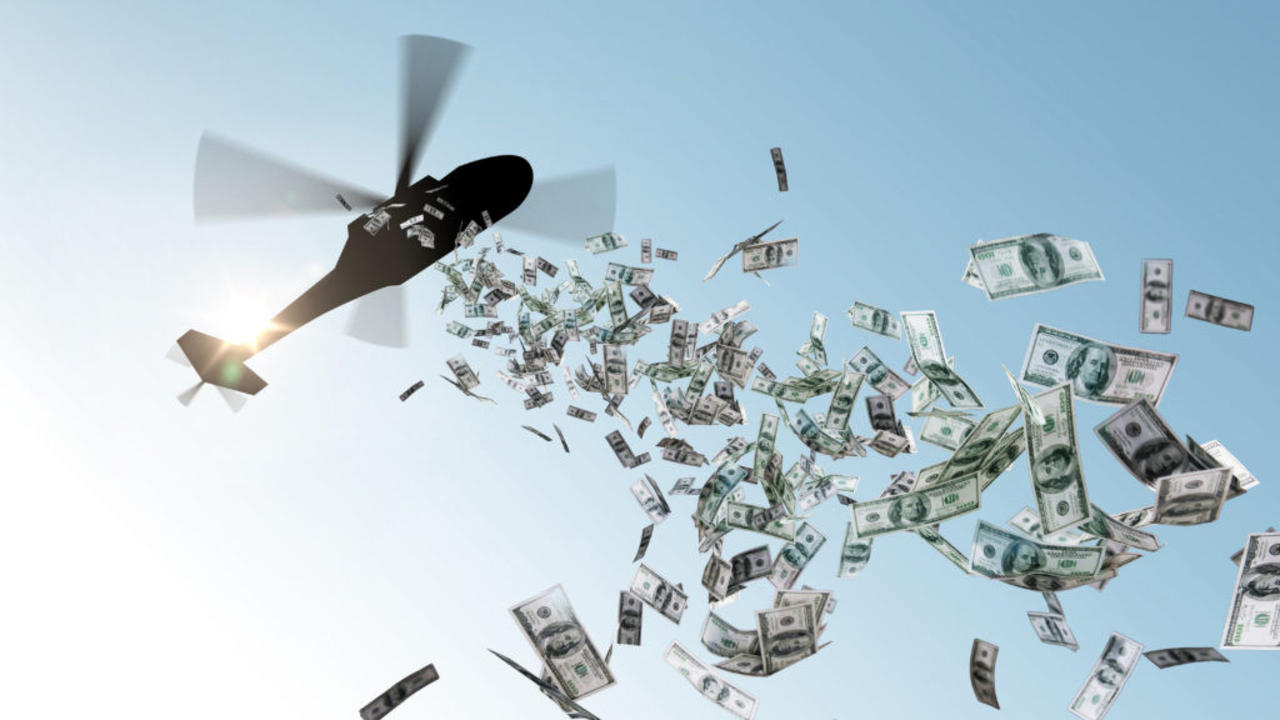 I hope you are all healthy and social distancing and staying safe.

Karen and I have been fairly silent over the last month or so, like many of you, responding to the events swirling around us while trying to maintain a healthy dose of optimism for the future. We know this period will pass, like many of the other bleak periods in human history. We just don't know what the new world looks like. It will definitely be different than the world we left in late 2019. And I'm sure different opportunities will abound for us all.

But the reason I’m writing this post is because I’ve received calls from a half dozen people over the last 10 days asking if they should start ‘buying on the dip’ or start to ‘invest against the herd’ etc. 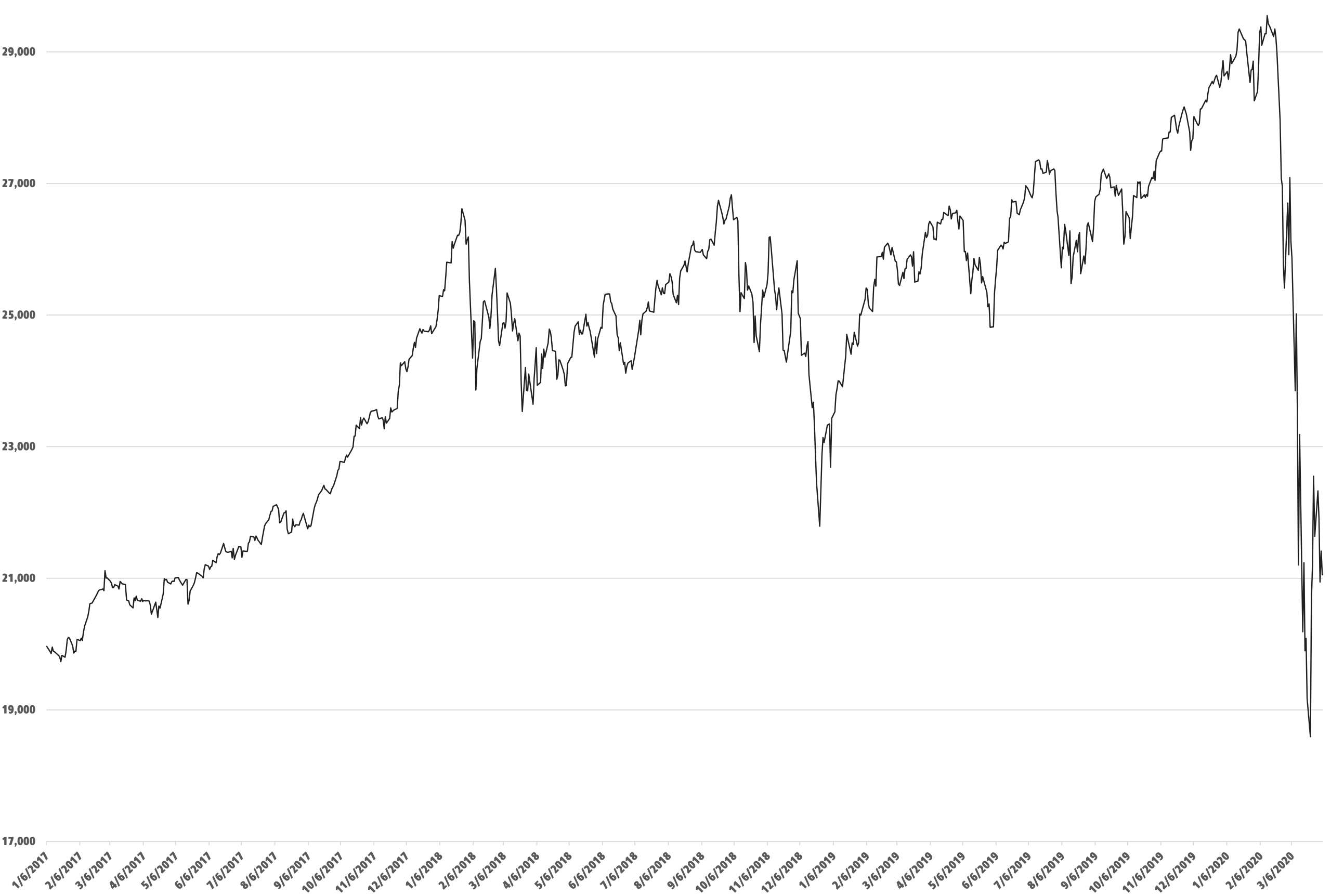 Movement of the DJIA between January 2017 and March 2020, showing the all-time high on 12 February, and the subsequent crash during the COVID-19 pandemic

Remembering that Free advice is not always worth the price, I reply:

“I can’t tell you what to do but we are no way near the bottom. We have not seen the worst of this black swan event play out yet.”

I don’t know that for sure but I’m willing to bet it is true. Anyone willing to take a wager?

From a historical perspective, check out the multiple downward bounces of the S&P Index during the Financial Crisis in 2008. I think you should expect similar volatility in the coming months: 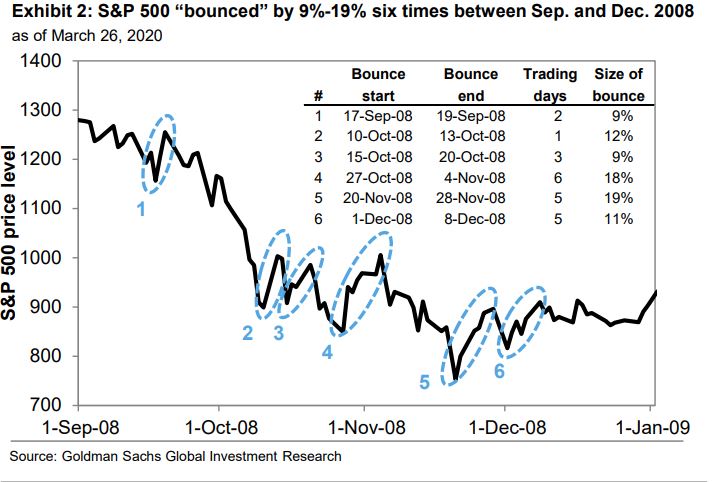 You see, this is an unprecedented black swan because it is happening during a time like no other. We can try and compare it to the Spanish Flu in 1918 but the world has developed and changed enormously since then.

One could argue that the Spanish Flu was so lethal due to the lack of antibiotics at the time to treat secondary bacterial infections. And given any lack of medical treatment, they could only combat the disease through isolation, quarantine, disinfectants, and by limiting public gatherings. But we are facing the same lack of pharmaceutical solution for Covid-19 AND our world today is much more complex and interwoven than 100 years ago. Since 1918, the world’s population has increased from 1.8 billion to 7.8 billion people. We also have a completely integrated global market economy defined by free trade, free flow of capital, and the tapping of cheaper foreign labor markets that creates a complex global supply chain. I therefore believe Covid-19 combined with this extreme global interconnectedness is going to cause a greater negative impact on our lives compared to the 1918 Spanish Flu, notwithstanding today's pharmaceutical advances.

So while many people are probably focusing on Covid-19 spread or panic buying or the stupidity of Spring Breakers in Florida, I instead dive into the financial aspects of the events surrounding us. Looking for clues and data which might help me make some decisions regarding protection of our assets and to get ready for the future, whatever that might look like.

Because the actual economic impact(s) of shutting down economies for an extended period of time can reverberate through our financial system causing one or more secondary impacts to occur. So let's dive into the weeds a little to try and assess the secondary storm that might be on it's way...

According to the Institute of International Finance, global debt hit an all-time high of $253 Trillion in Q3 2019. Holy moly! That is the total debt across households, governments, and corporations combined. And two major contributing factors of that global debt are our low interest rate environment and ultra-loose monetary policy.

But before we discuss this in detail, let’s make sure everyone is on the same page as to how governments can potentially manage their way through a financial crisis. 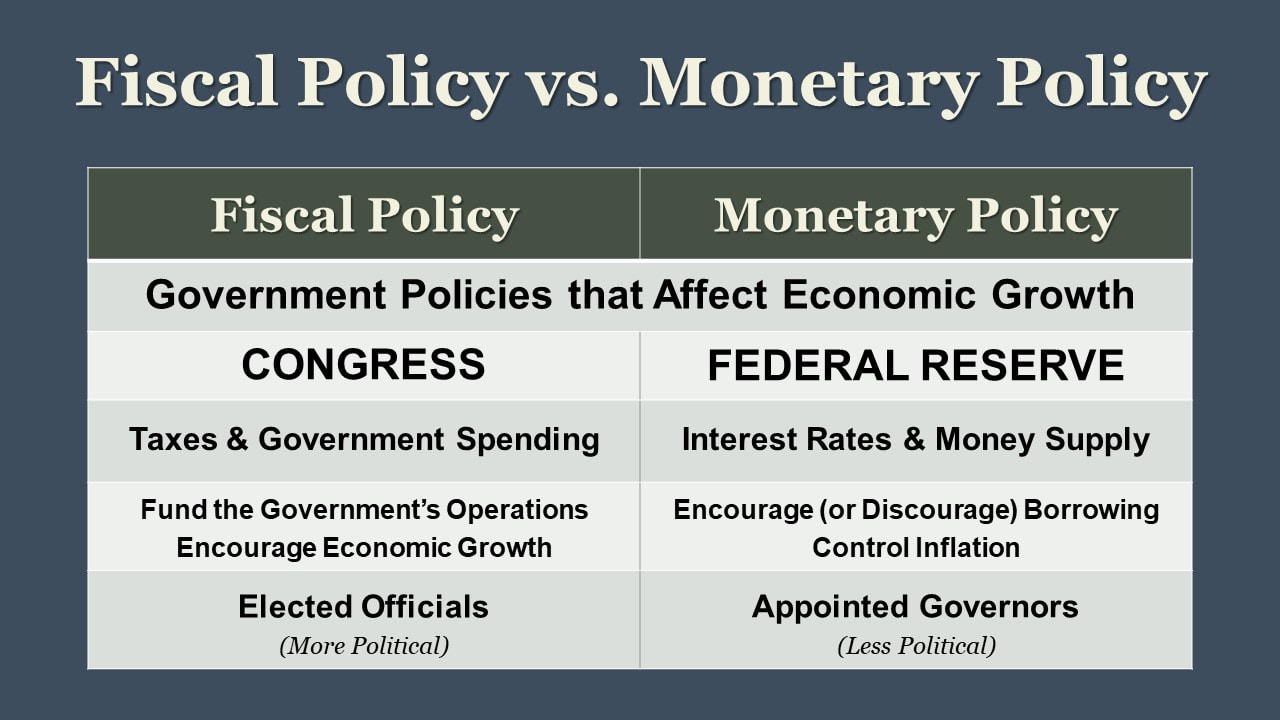 Governments have two main policy tools at their disposal:

Given we've seen how the government has responded with their fiscal policy tools already, let’s discuss the second tool in their toolkit, Monetary Policy. Many of us remember the good old days when governments used to balance fiscal policy over a cycle by increasing government debt in the crisis and then reduce it during the next expansion. But we’ve had such low interest rates across the globe trying to counter the 2008 Global Financial Crisis that we are at an effective 0% interest rate today going INTO this next crisis!! 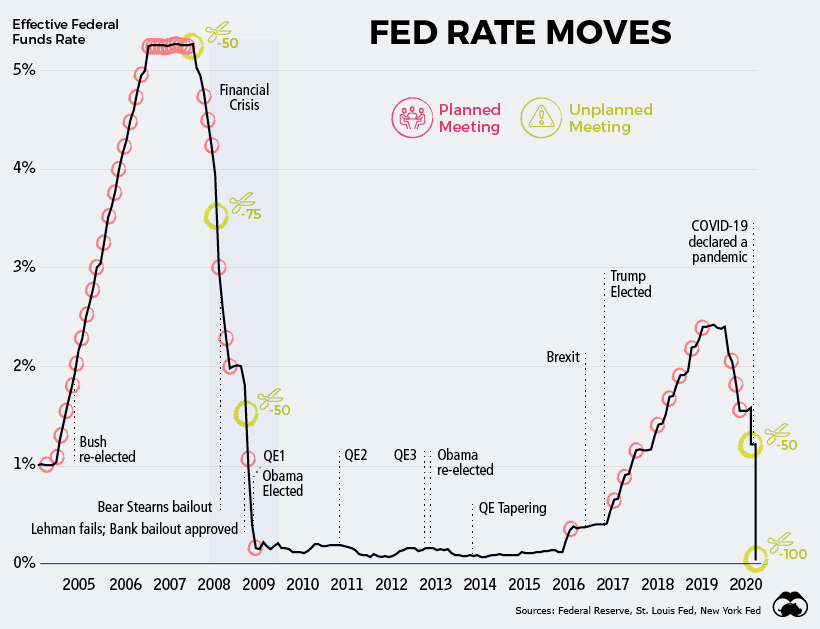 Also from the Monetary Policy toolkit, since 2008, both the Fed, European Central Bank, and Bank of England have been printing new money and spending it on government bonds, in a policy known as “Quantitative Easing.” Run through this infographic to understand how it works. This technique has been used exhaustively over the last decade to prop up our over-leveraged financial system.

And I would personally posit that Quantitative Easing (QE) has channeled more money to the wealthy who own the assets, due to prices boosted by QE. Versus ensuring a cash trickle-down to the poorer people who might use it to consume more and thus increase economic activity. This policy has thus significantly increased overall inequality.

Which sadly brings me to the only two remaining Monetary Policy options for the Covid-19 crisis available to our governments: Negative Interest Rate Policy or Helicopter Money.

I wanted to talk about Negative Interest Rate Policies and their potential impact on the global financial system and how you thought the “too big to fail banks” and “governments favoring the 1%” were the enemy during this last financial crisis. Wait until they start sucking dry the bank accounts of middle-class savers and retirees with their negative interest rates. In the US, that is greater than 150 million angry people at the ballot box…causing the rise of even more populist anti-establishment movements than today. At that stage, I’m opening an Amazon store to sell pitchforks! But I didn’t get there because….

Helicopter Money just got dropped on US Tax Payers!! 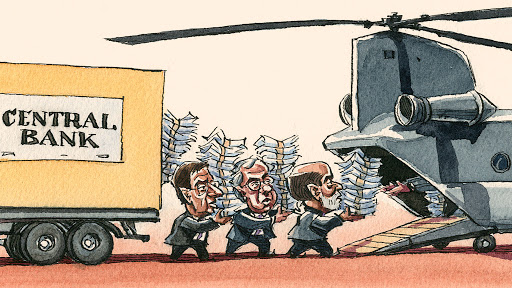 According to the Conservative Tax Foundation, over 93.6 percent of US tax-filers will receive some kind of helicopter money!

For background, the term Helicopter Money was coined by the Nobel winning economist Milton Friedman in 1969 in his famous paper “The Optimum Quantity of Money” in which he said:

Let us suppose now that one day a helicopter flies over this community and drops an additional $1,000 in bills from the sky, which is, of course, hastily collected by members of the community. Let us suppose further that everyone is convinced that this is a unique event which will never be repeated.

The concept being that central banks should consider cash transfers to households as an alternative to further reductions in interest rates or quantitative easing, based on the grounds of ensuring financial stability. Since 2012, economists have also called this idea "quantitative easing for the people”

Because rather than the rich benefiting through an increase in asset prices, the poor actually receive the cash directly and pump it straight back into the economy. The theory being that this direct cash infusion then stimulates the economy and we combat the risks of deflation.

Honestly, at this stage, nobody really knows what is about to play out.

But my common-sense slow-motion understanding of this monetary intervention by our world governments over the last decade points to an eventual journey into a potential deflationary economy, which brings with it huge negative consequences.

Think about it. During the Covid-19 crisis, in less than 6 weeks, we’ve seen global economic output come to a halt as demand for consumption and investment drops. And we are now all in the mindset of hoarding our money because we have no idea how long this crisis will last. 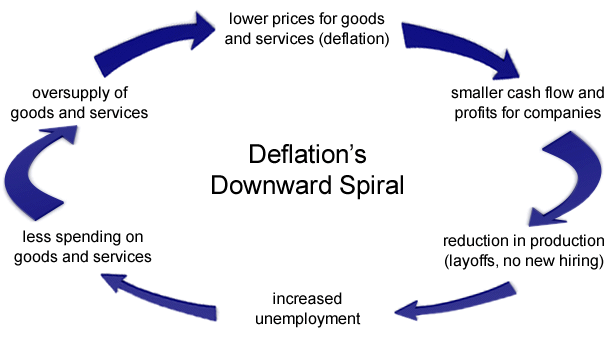 Which will potentially bring us into a vicious deflationary cycle. On top of the current exponentially increasing unemployment, production slows down to accommodate lower demand. Lower demand ensures that companies reduce or do not rehire their workforce, again ensuring massive unemployment.

The unemployed have a hard time finding work and deplete their savings to make ends meet, eventually defaulting on various obligations such as home mortgages, car loans, credit cards and student loans.

These bad debts ripple up to instability in the banking sector as banks write off these loans and show instability on bank balance sheets. Which in turn causes a run on the banks as depositors rush to withdraw their funds in case the bank fails. Causing the possibility of a financial system meltdown due to a lack of liquidity and credit.

Creating yet another government-backed bank bailout. And quantitative easing and lowering of interest rates.

But wait, didn’t we just do that?  Yes, we did. And it failed. And at some stage, the same monetary and fiscal policy tools we thought we had have become useless overnight.

This entire experiment is playing out in real-time and nobody knows what will happen and when. But for those of you asking me whether you should buy on the dip or against the herd?

Goldman Sachs is projecting that GDP will be NEGATIVE 24% in the second quarter and unemployment will be at 15%. Morgan Stanley is projecting a 30% drop in GDP. And these are the same guys LITERALLY telling us to buy stocks right now because the worst is behind us? Ugh.

And if that isn’t bad enough, in a Bloomberg interview last Sunday, Federal Reserve Bank of St. Louis President James Bullard predicted the unemployment rate may hit 30% in the second quarter because of shutdowns to combat the coronavirus, with an unprecedented 50% drop in GDP.

These numbers are BAD. They are worse than 2008 and worse than the Great Depression. Companies, in their earnings reporting, will reflect this in their outlook, which, of course, will crush stocks.

What I will be doing full-time is to continue looking for real estate and agricultural deals that are going to start appearing due to inexperienced investors having purchased assets at the peak, with too much leverage, and no cash on hand to survive the downturn. Like many of our Alliance members, we consistently built a stable portfolio of asset-backed cash-producing assets that can whether this downturn.

Would you like to learn how to invest in Real Estate and Agriculture so you can retain your wealth outside of the volatile stock market during future storms? Then please click here to schedule a call

Till the next time...